Confrontation and Other Essays - Rabbi Joseph B. Soloveitchik

This volume brings together five classic works by Rabbi Joseph B. Soloveitchik, one of the most eminent Jewish thinkers of the twentieth century. These essays – some collected here for the first time – address both perennial questions of religious existence and dilemmas specific to the modern era. They cover topics such as individual and community; the necessity of personal sacrifice in religious life; the Jewish attitude to physical pleasure, emotion, intellect, and humility; prayer; redemption; Torah study; and interfaith dialogue.

The essays serve as prime examples of the depth and insight that have earned Rabbi Soloveitchik’s writings entry into the canon of Jewish and general religious thought.

In this volume are: “The Community,” “Majesty and Humility,” “Catharsis,” “Redemption, Prayer, Talmud Torah”, and “Confrontation” (with a postscript, “On Interfaith Relationships”).

Rabbi Joseph B. Soloveitchik (1903–1993) was born in Russia into a family of renowned Eastern European rabbis. Initially trained in the scholarship of the sacred texts of Judaism, he enrolled at twenty-three at the University of Berlin in order to study physics, mathematics, and philosophy. He wrote his doctoral dissertation on the philosopher Hermann Cohen. In 1932, he accepted the position of chief rabbi of Boston, where he resided until his death. In 1937, he founded the Maimonides School there. For over four decades he commuted to New York City in order to teach at Yeshiva University, where his Talmudic and philosophical lectures gained renown for their probity and breadth. He was regarded throughout the world as a leading authority on the meaning of the Jewish law and as the leading intellectual figure in the effort to build bridges between Orthodox Judaism and the modern world. 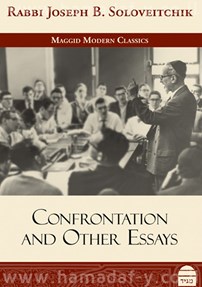 עבור לתשלום
Confrontation and Other Essays