Dialogue for Torah Issues & Ideas, No. 3

Dialogue was created to fill a void which exists in the present Torah observant world. There is presently no platform for the intelligent, Torah-oriented discussion of important contemporary issues and ideas by writers who are both steeped in Torah knowledge and committed exclusively to its values.

A review from Somehowfrum on Dialogue for Torah Issues & Ideas, No. 3

[from somehowfrum.blogspot.co.il] I am quite impressed with the latest volume of Dialogue. This 3rd volume is a remarkable contrast to the previous two volumes. Whereas the first two offerings showed growing pains, this latest edition boasts a maturity rarely seen in a periodical so young.

The bulk of the current issue focuses on Orthodoxy confronting changing attitudes towards Homosexuality and Metzizah BePeh. The magazine continues in the tradition of the Jewish Observer in clearly delineating and defining Orthodox Hashkafah vis-a-vis these topics.

The lead article, A Torah View on Homosexuality, was penned by Rav Aharon Feldman, Rosh Yeshiva of Ner Israel, member of the Rabbinical Board of Dialogue, and member of the Moetzes. RAF explains why Homosexual behavior is so despicable, and why, until recent times, even Gentiles did not sanction HS with a marriage document.

A follow-up article was written by Rabbi Hillel Goldberg, Editor of the Intermountain Jewish News, The Attempt to Legitimate Homosexuality Within Orthodoxy. RHG documents the geometric change in attitude that the world has undergone with regard to HS over the past 50 years. Particularly within some segments of "Orthodoxy" who advocate for behavior that the Torah clearly labels Toevah and prohibited.

The final essay in this trilogy was offered by Dr. Elan Karten, Sexual Orientation Change Efforts: A Clinical Perspective. He discusses his professional practice that revolves around those seeking Reparative Therapy to combat SSA.

Finally, Rav Shmuel Kamenetzky, Rosh Yeshiva of Philadelphia and member of the Moetzes shares his thoughts on Same Gender Attraction and Reparative Therapy in the letters section.

Rabbi Moshe Einstadter, member of Dialogue's Editorial Board takes us on an intellectual journey, Koheles and Shir HaShirim Two World Views, into the paradox how both Koheles and Shir Hashirim could be written by the same author.

Rabbi Benjamin Blech writes on the topic of The Parah Adumah and the symbolism of Color. He takes us on a fascinating journey into the mystery of this Chok, and along the trip we discover many insights into Eisav's selling of the Bechora, and the significance of the color red.

What would a good Jewish Journal be without some reference to the Cairo Genizot? Professor Robert Brody shares with us Polemics in the Early Geonic Period - Pirqoy Ben Baboy's Letter and Its Implications.


Doctors Isaac Betech and Obadia Maya delve into The Identity of the Shafan and Arnevet. This is a snippet from their forthcoming book The Enigma of the Biblical Shafan. Using a novel interpretation of Maaleh Gerah (to get around the problem that rabbits and hares don't chew their cud), they argue that the Shafan and Arnevet are in fact the rabbit and the hare, and not the hyrax as argued by other recent authorities.

Professor Brenda Breuer joins the fray with An Epidemiological Critique of the CDC Report on Metzizah BePeh.

Professor Simeon M. Berman follows with An Analysis of the CDC's Statistical Methodology.

Professor Awi Federgruen also challenges the CDC's position with A Review of the CDC Statistics.

A lawyer enters the arena with Is Metzizah BePeh Dangerous? A Critical Analysis of the NYDOH Study by Yerachmiel Simins, Esq.

And lastly, we have two more lawyers: Informed Consent for Metzizah BePeh - A Legal Analysis. by Shay Dvoretzky and Yaakov Roth Esqs.

Letters to editor include Rav Shmuel Kamenetzky's letter which was already noted above. Also, a short correction is noted by Avi Horowitz with regard to Yoram Bogacz's article from the previous edition.

The last two articles are in Hebrew. Rabbi Yechiel Goldhaber writes on the history of secular marriage in France and Italy, and Rabbi Eliyahu Avigdor Feldman writes on מציצה בפה ושכיחא הזיקא.

All I can say about this new edition is Wow! My complaint about earlier volumes was primarily how sparse they were. This new edition is almost 3 times the size of the previous two. I didn't notice any blatant typos. There is enough material here to keep one engaged for quite some time. Another minor complaint was the drab color used for volumes I and II. The deep blue of the current edition is a remarkable improvement in that regard. The only thing that puzzles me about volume III is that the Hebrew articles increment using the English page numbers. In other words, unlike Hakirah where the Hebrew articles start at the end of the volume and move towards the middle, these articles flow left page to right page. Another criticism has been that Dialogue does not engage in dialogue. Yet although this volume is heavy on the Pro MbP camp, the fact that they included opposing views was refreshing. Finally, they've removed the advertisement on the back cover, giving it a more professional look. 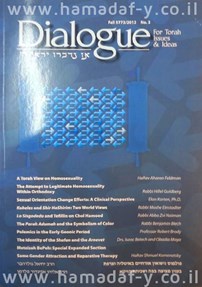 Dialogue for Torah Issues & Ideas, No. 3

The Garden Of Wisdom