Dove on a Barbed Wire

The book Dove on a Barbed Wire - 180 pages, by  Deborah Steiner-Van Rooyen.

When Deborah Steiner-van Rooyen was instructed by her grandfather to locate Yonah Steiner, his brother’s son, all she had to go on was the name of the Israeli kibbutz he had lived on nearly two decades earlier. Against the odds, however, she was able to find Yonah and—more impressively—persuade him to share his experiences during the Holocaust, which he had to that point refused to discuss, even with his own children. Yonah’s memories of his life from his capture at the age of 13 by the Nazis in Poland while on his way home from school, through the seven brutal years of slave labor he endured in a concentration camp, to his liberation from the camp, upon which he and other prisoners maimed and murdered Nazi soldiers with bayonets, are astonishing in their forthrightness and utterly moving. With 32 pages of color and black-and-white photos, this deeply affecting chronicle serves as evidence both of humankind’s tremendous capacity for cruelty, but also its penchant for resilience in the face of adversity.

Deborah Steiner-van Rooyen is a graphic designer and a writer. A former freelance photographer, she also worked as a design consultant for the Noor Al Hussain Foundation, which helps rural village women and refugees develop crafts and textiles for export markets. She lives in Boston. 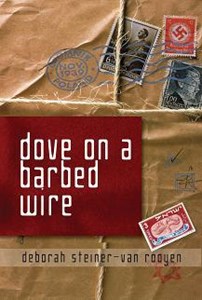 Dove on a Barbed Wire