About the Essays on Ethics

Why was Abraham ordered to sacrifice his son? Was Jacob right in stealing the blessings? Why were we commanded to destroy Amalek? What was Moses' sin in hitting the rock? And how did the Ten Commandments change the Jewish people, and humankind, for good?

Essays on Ethics is the second companion volume to Rabbi Jonathan Sacks's celebrated series Covenant & Conversation. Believing the Hebrew Bible to be the ultimate blueprint for Western morality, Rabbi Sacks embarks upon an ethical exploration of the weekly Torah portion, uncovering its message of truth and justice, dignity and compassion, forgiveness and love

Rabbi Lord Jonathan Sacks is one of the world's leading Jewish thinkers and moral voices of our time, laureate of the 2016 Templeton Prize. Educated at Cambridge University and Jews' College London, Rabbi Sacks served as chief rabbi of the United Hebrew Congregations of the Commonwealth from 1991 until 2013. The author of numerous books on Jewish thought, his work has included a new English translation and commentary for the Koren Sacks Siddur, the first new Orthodox siddur in a generation, as well as powerful commentaries for the Rosh HaShana, Yom Kippur, Pesah, and Shavuot Mahzorim. 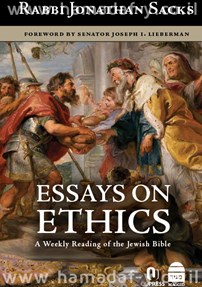 A World After This