Yael Unterman
Professor Nehama Leibowitz (1905-1997), winner of the Israel Prize in Education, was a unique figure in the twentieth century Jewish landscape. She wrote a best-selling series, Studies in the Weekly Torah Portion, and provided a one-woman correspondence course in Bible, using her famous gilyonot (worksheets), for more than thirty years. A brilliant teacher, an erudite scholar, and a forthright, warm and humorous human being, she left her mark on tens of thousands of people around the world: taxi drivers, waitresses, professors, rabbis, kibbutzniks and students.
This book documents her life story, inspiring personality and scholarship. It discusses her strong views on such issues as Zionism, humanism and feminism, as well as the influences that shaped her. Other topics covered include her pioneering approach to Bible and commentaries that changed the face of Jewish Bible study, her acceptance as a prominent Torah scholar despite her gender, and the future of her work in light of recent scholarship.

Nechama Leibowitz's story is not only that of an accomplished woman or even of a great Jewish personality, but also touches upon some of the major developments and concerns of twentieth-century Jewish life. 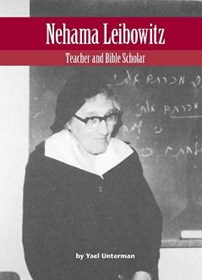 The Malbim On Iyov - English Translation