Shalom Freedman    הוצאת Urim Publications
Chief Rabbi Brigadier-General Shlomo Goren (1918-1994) made a unique and unforgettable contribution to the Jewish people. More than any other person, he embodied the ancient ideal of being both a great Jewish scholar and a remarkable soldier in the service of God and the Jewish people. He was the first chief rabbi of the Israeli Army (and later of Israel) and the most significant formative force in creating the Jewish nature of the army. His great genius in learning is reflected not only in his pioneering work in Jewish law and his monumental scholarship on Talmud Yerushalmi, but in a wide variety of books touching upon almost all areas of modern Jewish life and thought.
His service as a soldier for Israel involved him in every possible kind of duty: from childhood smuggling of arms for the Haganah to serving as a sniper in the War of Independence, from the holy and dangerous task of retrieving bodies from the field of battle behind enemy lines to the moments of glory when he served as an inspirational presence in notable battles, and most memorably in the 1967 war, where he is wellremembered for his part in the recapture of the Old City, the Kotel, and the Temple Mount. 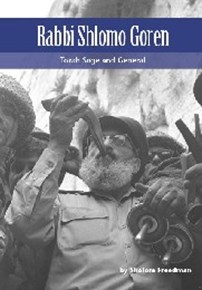