Sages of the Talmud

Mordechai Judovits    הוצאת Urim Publications
Sages of the Talmud is a collection of biographical information about the authors of the Talmud. It contains about four hundred entries and hundreds of anecdotes about the sages, all as recorded in the Talmud itself. An indispensable book for the student of the Talmud, it is not only an excellent practical reference guide, but also a text of general interest that may be read for enjoyment. This reference work cites the source of each quotation in the Talmud. The fascinating anecdotes and stories give readers an idea of the kind of social environment in which the sage lived. The work also includes an appendix with the corresponding general history of the time so that the reader can understand the contemporary political climate.
In the Talmud, several sages share the same name. This can be confusing to students, who wonder which rabbi made a particular statement. The author removes this confusion by linking each story and citation to the correct talmudic sage. Although the names of the sages sometimes appear close to one another in the Talmud, they did not necessarily live in the same time period - some lived hundreds of years apart. The book clarifies important questions, including the period of time in which the sages lived, who their teachers or significant colleagues were, and the house of study or city associated with them. 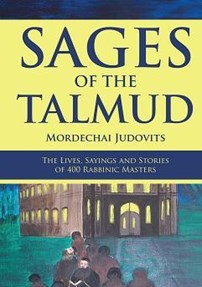 Sages of the Talmud

עבור לתשלום
Sages of the Talmud