The Lonely Man of Faith is a timeless philosophical essay by one of the twentieth century?s greatest Jewish philosophers, Talmudic scholars, and religious leaders, Rabbi Joseph B. Soloveitchik. In this classic work, Rabbi Soloveitchik probes the inner experiences of those who seek both redemptive closeness with God and creative engagement with the world. With characteristic brilliance and eloquence, he delineates the struggle of people of faith to navigate between seemingly contradictory aspects of the human condition: the spiritual and the material, the religious and the scientific, the covenantal and the majestic.

Highlights of this newly revised edition of The Lonely Man of Faith include:  Transliterations and translations of the Hebrew,  fully sourced references,  restoration of the original chapter divisions and a new introduction by Rabbi Reuven Ziegler.

Rabbi Joseph B. Soloveitchik (1903–1993) was born in Russia into a family of renowned Eastern European rabbis. Initially trained in the scholarship of the sacred texts of Judaism, he enrolled at twenty-three at the University of Berlin in order to study physics, mathematics, and philosophy. He wrote his doctoral dissertation on the philosopher Hermann Cohen. In 1932, he accepted the position of chief rabbi of Boston, where he resided until his death. In 1937, he founded the Maimonides School there. For over four decades he commuted to New York City in order to teach at Yeshiva University, where his Talmudic and philosophical lectures gained renown for their probity and breadth. He was regarded throughout the world as a leading authority on the meaning of the Jewish law and as the leading intellectual figure in the effort to build bridges between Orthodox Judaism and the modern world. 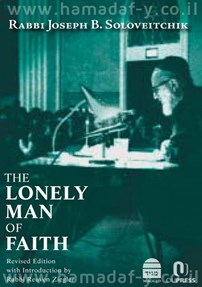