The Quest for Authenticity

Michael Rosen    הוצאת Urim Publications
The Przysucha (Yiddish: Pshiskha, pronounced Pe-shis-kha) school of Hasidism believed in a service of God that demanded both passion and analytical study. There was little or no study of kabbalah in Przysucha, and the emphasis was not on trying to understand God, but on trying to understand the human being. It was clear to them that one could not stand with any sense of integrity before the Divine Presence unless one first had some clarity of who one really was.
Directly or indirectly, Przysucha had declared an internal war upon the hasidic leadership of its time. It simply refused to accept anything that smelled of falseness and self-deception, be it the honor due to a zaddik or a particular religious practice. Przysucha equated pretension and self-deceit with idol worship.
During the early part of the nineteenth century, when the center of the hasidic world was in Poland, R. Simhah Bunim transformed Przysucha Hasidism into a movement and thus rose to become a, if not the, dominant personality in the Hasidic community. 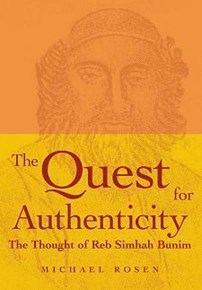 The Quest for Authenticity

עבור לתשלום
The Quest for Authenticity