Raphael D. Blumberg    הוצאת Urim Publications
The present volume, which contains more than one hundred vivid stories about Rabbi Boruch Milikowsky's relationship with his students, entertains as it inspires. With tears and laughter, you will accompany Rebbe through the tragedies and triumphs of his life as he reaches out to his students with humor, wisdom and compassion, helping each one to achieve his full potential as a Jew and a human being.
They Called Him Rebbe also contains new primary source material about the Holocaust and the Mir Yeshiva's years in Shanghai.

Rabbi Boruch Milikowsky was born in Vishnevo, Belarus in 1913. Over a twenty-year period, he learned in Radin, Baranovitz and at the Mir Yeshiva. Together with the Mir Yeshiva, Rabbi Milikowsky fled to Shanghai during World War II. The Nazis murdered most of his family.
After the war, Rabbi Milikowsky became a Torah educator and mashgiach at the Talmudical Academy of Baltimore. There, over the course of forty years, he employed his unique, God-given talents to help hundreds of boys to remain Jewishly strong and inspiring many to go on to careers in the rabbinate and in Jewish education. He passed away in 1990 and is survived by four children and many grandchildren who live in both the United States and Israel. 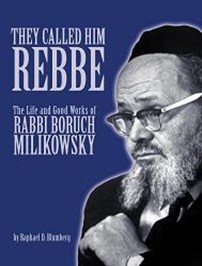 For The Love Of Israel And The Jewish People

עבור לתשלום
They Called him Rebbe