Rabbi Avraham Sabba was born in Castile in 1440 and spent the first 50 years of his life in parts of Spain where Jews lived in prosperity and security. He wrote many books, among them the Torah commentary Tzror hamor. His genius is evident from the manner in which he selects hundreds of quotations from the Zohar, the most famous mystical text, in which he demonstrates that the author of the Zohar is capable of being understood by the average Jew, (as opposed to scholars) and that the Zohar is helpful in understanding many difficult passages in the Torah.

He was forced into exile to Portugal in 1492, and to North Africa in 1497 after not only being persecuted and seeing many members of his family die for kiddush hashem, but he had to rewrite this commentary completely from memory, as in Fez, Morocco he had no library at his disposal. He died on board a ship on the way to Italy and was buried in Verona in 1510 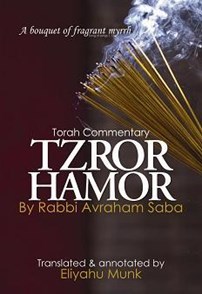