The author of The Betrayal, The Outcast, and The Dark Secrets does it again!

Who is Pyotr Tropimovitz Barnov? An expatriate Russian aristocrat, searching for adventure in America's Wild West? A socialist on the run from Tsarist forces? An apostate Jew? A faithful follower of Torah?

And why is Barnov's life inextricably tied to the fate of Gedaliah Kagan, a young Jewish man conscripted into the Tsar's brutal army?

No one knows. All that is certain is that Barnov is an expert marksman, a man of courage who would leap into the flames of a burning railroad car to save something precious, and face down outlaws bent on his destruction.

In her previous bestselling novels, author M. Kenan thrilled and delighted readers with her gripping tales of the Kingdom of Khazar. Wildlands offers the vivid writing, unforgettable characters, and edge-of-the-chair plotting that made her novels so popular - but this time, the non-stop action takes place in the fascinating world of Tsarist Russia and America's Wild West.

Wildlands. It's a mystery. A thriller. A dramatic work of historical fiction. Most of all, it's a compelling and thought-provoking story that keeps us enthralled right up through Barnov's final shocking adventure. 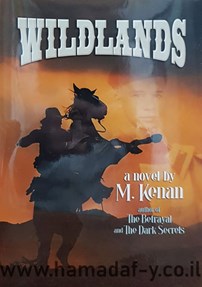 One Baby Step at a Time